The extraordinary story of an exceptional campsite in Occitanie

The story of Le Brasilia is above all a family story, attached to its Catalan roots and to the original values of tourist accommodation: the central focus being on the customer.

Started by Mr and Mrs Pla and carried on by Roger their son, the policy of closeness to customers, being attuned to their needs and availability have always been the strong assets of Le Brasilia. The soul of our Pyrénées Orientales campsite continues to exist through the current teams, who are following the path marked out by its creators.

Le Brasilia is at the forefront of new marketing and communication techniques (Web, social networks:…). Yet we know that there is no substitute for giving you attention on site. So that on your day of departure, you say to yourself:

René and Simone Pla embark on the gamble of a lifetime: establishing a campsite. These farmers believe in tourism development in Languedoc Roussillon. Their energy and their passion for work will enable them to overcome all the challenges involved.

The story starts… The Le Brasilia campsite opens in June, with the creation of a shopping area in the grounds.

Why this name?
When René Pla has to find a name for his campsite, he hits upon a bright idea. That of linking his creation to that of the capital of Brazil, Brasilia, which has been established three years earlier. Both ‘Brasilias’ have the common feature of having been created in the same era, in the middle of nowhere and in record time.
1973
Owing to an ability to adapt matching their passion, the Le Brasilia campsite quickly extends from 1.5 to 15 hectares by the sea. René and Simone perfectly complement each other, wonderfully combining creativity and availability. As close as possible to their customers, they are good at listening to and anticipating their requests: the quality of the facilities, services and accommodation never stops improving.
Thank you!!
In the late 70s

Roger, the son of Simone and René, joins this fabulous adventure. The campsite evolves and responds to new demands in this lovely spirit of sharing and respecting tradition.

Thanks to the construction of two tennis courts, and the increase in the level of comfort, the campsite obtains its third star.

1980
The family leaves agriculture for good.

“It took 15 years to be financially viable,” observes Roger.
He now assists his father with the campsite management.
The logo, a genuine summary of the campsite’s DNA
The first ever logo was designed by René Pla. To accompany the name he had found, ‘LE BRASILIA’, René quickly thought of the sombrero and the guitar, symbols of exoticism and festivities. The original logo has evolved a lot over the course of the decades, but the spirit remains faithful to its origins. The sunshine, music, festivities and the Catalan colours are all found in the current logo, and are a summary of the offer made to all holidaymakers on Le Brasilia.

The beginning of the 80s sees the emergence of the holiday rental. With this in mind, René buys 5 bungalows in Spain for 50,000 French Francs (€7,623), and then decides to go and see how they are made in Barcelona. When he returns, he creates his own bungalow construction company on Le Brasilia. Nowadays, the Brasilia and Pinède districts are comprised of these high-quality cottages. For his part, Roger is occupied with marketing. He is already dreaming of joining together with other campsites to share promotion.

About ten campsites around the Mediterranean thus found the chain ‘Mediterranean Holidays’. Within the group is the ‘Club Farret’ owned by Robert Giner in Vias, but also ‘La Sirène’ in Argelès, ‘La Yole’ in Valras, and even ‘La Petite Camargue’ owned by Bernard Sauvaire. The grouping does not last beyond four years but the experience proves instructive. Le Brasilia also joins the Airotel club, again for a specific period.

Holidaymakers are not simply content with sand and sea. Roger ends up by taking the plunge and creates a pool.
1991

To complete these quality facilities, a discothèque and a multi-sports ground are created. It is also at this time, that he introduces childcare on the site.

Roger recruits a trainee receptionist, Yann Marlic (who will become Deputy Manager in 1996 and is currently General Manager). The permanent staff dedicated to administration and maintenance is strengthened each year. Not a winter goes by without work being done: all of the sanitary blocks are redone. The holiday rental area is extended with the Pinède 1 and 2 districts, the surface area of the pitches increases, and the shopping area and the reception pavilion are refurbished.

In April, Le Brasilia is rated 4 star and becomes a Superplatz in the German ADAC guide, a position that it will not relinquish. The Michelin guide also classifies Le Brasilia in the very highest category: 5 red tents.

Green Addict
Major efforts have been focused on the botanical aspect of the campsite. Each year, thousands of flowers appear to make the avenues and paths of the campsite more attractive. Flowers arrive in mini clods of earth in February, and are grown in the greenhouse in Canet Village. The Le Brasilia greenhouse enables a regular supply of flowers for the campsite throughout the season, and to replace ‘tired’ plants. A botanical route enables the discovery of multiple varieties of trees and flowers.
1996

Roger Pla loses his father. His mother continues to manage reception to the greatest delight of holidaymakers, who ask for her from their arrival.

The best French campsite (DCC EUROPA-PREIS) is awarded to Le Brasilia on 18th February 1996 in Munich, by the German federation of camping and caravanning, the ‘Deutscher Camping Club’.

In the meantime, Roger has become Vice-President of the regional Fédération de l’Hôtellerie de Plein Air Languedoc-Roussillon (Federation of Camping and caravanning in Languedoc-Roussillon). He has responsibility for the Pyrénées-Orientales. In 1995, he is also elected Vice-Mayor for Tourism for the town of Canet-en-Roussillon. With Arlette Franco, his partner and herself Mayor of the resort from 1989 to 2010, Roger does 2 mandates in tourist development for Canet en Roussillon.
Thank you!!
2000
The 2000s

They experience the beginning of the themed campsite: they create surroundings favourable to dreaming and the exotic to “enable customers to travel”…

The leading themed creation is the Okavango village. Comprised of 27 cottages with African surroundings, this new district has been established in the heart of lovely vegetation. 31 other cottages will complete this first district.

Le Brasilia is the leading French campsite to join the prestigious chain of European campsites: the ‘Leading Campings of Europe’.

The Yelloh! Village adventure
The year 2000 sees the establishment of the Yelloh! Village group. A number of campsite owner friends decide to pool their experiences and their means, to create the Yelloh! Village chain and Le Brasilia is a founder member. The first brochure brings together 7 campsites, but Yelloh! Village in a few years rapidly becomes the quality reference point for luxury hotel camping and caravanning, now attaining a total of 93 campsites. 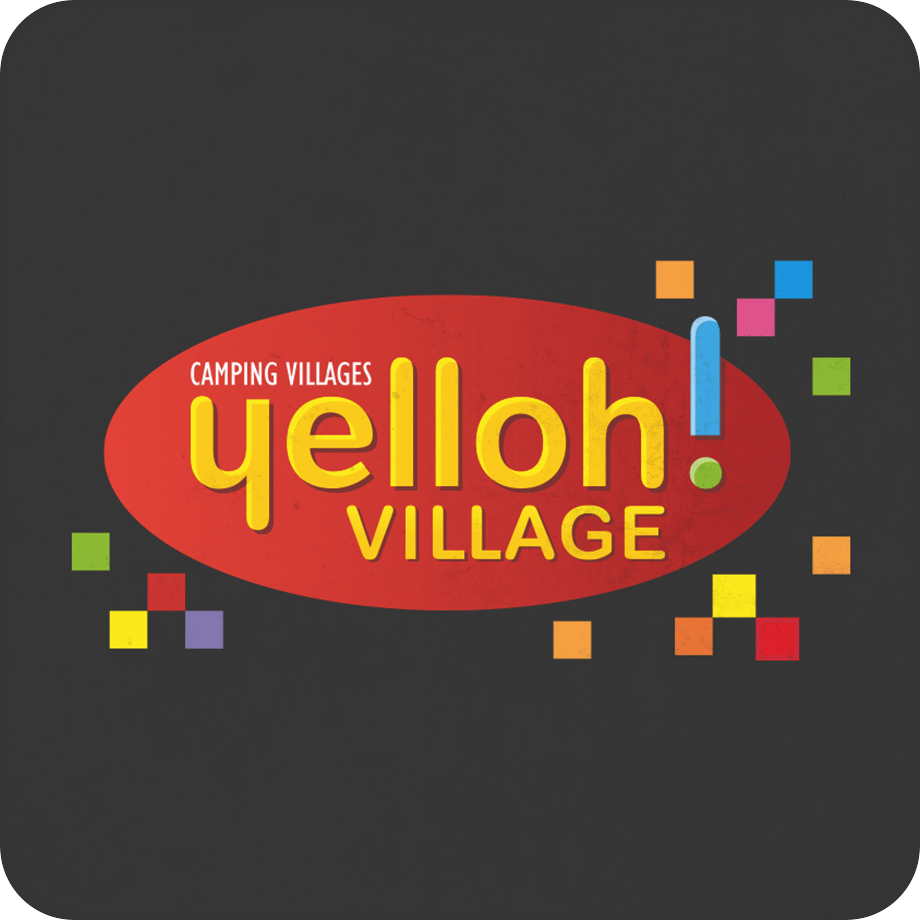 The ADAC prize for the best campsite of the year proves to reward the creation of the Okavango village.

The water park ‘L’Archipel’ brings the Seychelles to the Le Brasilia campsite. The opening of this water park is also the opportunity to give the National Order of Merit medal to Roger.

Le Brasilia is classified as 5 star according to the new standards.

Mass was for a long time celebrated on Le Brasilia up to the end of the 1970s. In July 2011, we were able to revive this tradition thanks to the priest from the parish of Canet who every Sunday celebrates mass…on this occasion in the discotheque transformed into a chapel!

The “Les Créoles” district adds an exotic note to the rental park on Le Brasilia. The exterior architecture inspired by the Creole cabins and the generous vegetation are an inspiration in addition, inviting our customers on a new journey in the tropics.

At the beginning of the season, a new entirely heated sanitary pavilion accommodates customers in the Florida sector. Nowadays camping pitches represent 60% of the accommodation capacity on Le Brasilia.

So as to complement the services and leisure offering, 2 new pools with pure lines complete the ”L’archipel” water park, as well as a magnificent wellness centre named ”Le Papillon Spa”.

2019
To perfect the existing offer, the new “allée des commerces” shopping esplanade opened in 2019. This pedestrian avenue comprises a wine bar, a hairdressing salon, a clothes shop and a shop selling newspapers and beach articles. The avenue was created in a typically Mediterranean style, to provide your holiday with even more colour.
“Nearly 60 years after the creation of the Le Brasilia campsite by my parents, our desire to offer you ever more delightful holidays, by perpetuating the soul of Le Brasilia, has not left us. New projects are being considered, new creations will be offered to you. That is the continuation of the story, which you will discover soon. A tremendous Thank you to all of you for your loyalty.

You have been the main players in this great story and your attachment to the Le Brasilia campsite will enable us to to write even more great pages. ”
Thank you!!